Generative AI tools like OpenAI´s ChatGPT can assist in Text Ad creation by automatically producing advertisement texts to better fit the customer's needs. The chatbot can generate personalized responses based on the user's request by identifying the most outstanding features of the product to be advertised. Furthermore, by using prompt engineering techniques the desired outcome can be further fine-tuned.

Datascience & AI in Marketing and Retail

OpenAI is a research laboratory that is dedicated to the development of advanced artificial intelligence in an ethical manner. They aim to create AI that can positively impact humanity as a whole, and they have already made significant strides in the field of digital marketing. Many major companies, including Google, Facebook, and Microsoft, utilize OpenAI’s algorithms to enhance their products and services. For instance, Google uses OpenAI’s technology to improve the relevance of search results, while Facebook employs it to identify fake news. Additionally, Microsoft utilizes OpenAI’s AI to increase the accuracy of translations. As OpenAI’s technology continues to advance, it is likely that more companies will adopt it to improve their offerings.

As the landscape of digital marketing becomes more intricate, businesses are searching for ways to tailor their campaigns to better target and connect with their desired audiences. In this effort, AI technologies like those developed by OpenAI can be extremely useful. For instance, a business could use GPT-3 to automatically generate personalized marketing content for each customer, or utilize DALL-E to create unique images for social media posts. By utilizing the capabilities of AI, businesses can gain an advantage and effectively communicate with their customers.

| Actually, the two paragraphs above were written by AI 🙂

ChatGPT is a natural language processing tool developed by OpenAI that allows you to interact with a chatbot in a way that feels like a conversation with a human. This language model is capable of answering questions, assisting with tasks such as writing emails, essays, and code. The chatbot is able to engage in follow-up conversations, admit its mistakes, challenge incorrect assumptions, and reject inappropriate requests thanks to its dialogue format. Using the ChatGPT chatbot is fairly simple, as all you have to do is type in your query and receive a detailed response with several sentences or paragraphs. However, OpenAI does require an account before you can use any of its tools, so if you don’t have one you will have to register.

How ChatGPT can generate Keywords and Text Ads

The ChatGPT webpage is easy to use and includes a space for the chatbot’s responses to appear and a text box at the bottom of the page where you can type your questions or statements. While we initially tested it by asking questions, OpenAI suggests inputting statements for the best results. For example, inputting “generate 10 keywords for bike repair” will give a list of possible keywords that relate to bike repair. 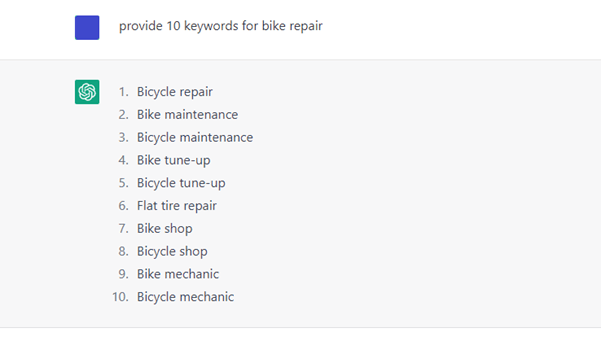 In addition to creating keywords, ChatGPT is smart enough to understand what a Text Ad is. For example, when I query the chatbot with the following input: „Write a text ad for a bike repair shop“ it generates an output as follows:

Prompt Engineering: Improving the quality of the Text Ad

ChatGPT was trained with general purpose data and can create text ads from all available domains. However, in order to increase the accuracy and as a consequence the effectiveness of the text ad, the input query (the „prompt“) has to be modified to better reflect the natural language that these systems were trained to understand.

Prompt engineering refers to the practice of finding prompts or input that lead to useful or desired outcomes. A common example of this is searching for information on Google. While we can usually find what we are looking for on the search engine, it can be challenging to access it. In order to guide machines towards the answer we want, we may need to use keywords that do not make sense to humans. For example, we might include the year in our question to get more current results, or append the word „wiki“ to get concise answers from Wikipedia rather than lengthy content from bloggers.

For machine learning, this relates to how we phrase our inputs. In our previous example asking the chatbot to write a text ad for the bike repair shop, we could add to the prompt to provide also a title along with the description and to restrict the text ad to 90 characters or even to provide more alternatives of the text ad. This way the output reflects better the requirements posed by Google Ads.

Another prompt engineering technique we could use in order to achieve better or more accurate results is to make the chatbot aware of the content of the specific web page for which we are creating the text ad. We could rephrase the query by adding also the web page content for which we want the chatbot to create the ad besides the title and max character restriction. The system is smart enough to include the most highlighted features of the company’s offerings as well as what makes them distinct from the competition. In the example below we are interested for a text ad for a specific bicycle repair shop that could be our customer so we give the web page as input to the query and this is the generated response:

In general, we could say that the more descriptive the input text, the better the result is. In the above example ChatGPT included the outstanding feature that differentiates this specific bike repair shop from the competition (“90 Day Service Warranty”) in the text ad as well as the call-to-action “Stop by today!”.

Despite the very good results of the chatbot, experts have expressed concern about artists’ intellectual property rights, plagiarism within the education system and, in its current state, inaccuracies generated by ChatGPT, prompting bans from developer sites like Stack Overflow from auto-generated content since it may mislead other developers. However, stock image companies are taking different positions. Getty Images on the one hand has banned AI-generated images from its offering while Shutterstock on the other hand has signed a deal with OpenAI to embed DALL-E in its website and says it will start a fund to reimburse artists whose work has been used to train the models. To avoid the misuse of large language models, a mechanism for proving the origin of the text, art, news, or whatever is needed. Identifying unauthorized use opens up the door for a concept known as “Digital Watermarking”. Digital watermarking is the process of embedding a digital code or identifier into a digital media file (such as an image, audio, or video file) in a way that is not noticeable to the viewer or listener but can be detected by a computer. The purpose of a digital watermark is to identify the ownership or source of the media file and to prevent unauthorized use or distribution. Digital watermarks can be used for a variety of purposes, including copyright protection, content identification, and tracking the distribution of media files. They can be added to media files during the creation process or added later using specialized software.

Although ChatGPT can produce impressive results, it is unlikely to entirely replace Google search or highly skilled positions in the near future. The human touch is still necessary to effectively operate and validate AI tools, and so they should be viewed as productivity enhancements rather than replacements. As a digital marketer, you can use these tools to increase efficiency and expand your creative potential. However, it is important to exercise caution when utilizing ChatGPT and other AI tools, as there may be potential issues with search engine violations and limitations in accuracy.

If you want to use AI for your online advertising or need advice on this topic please contact us via kontakt@e-dialog.group 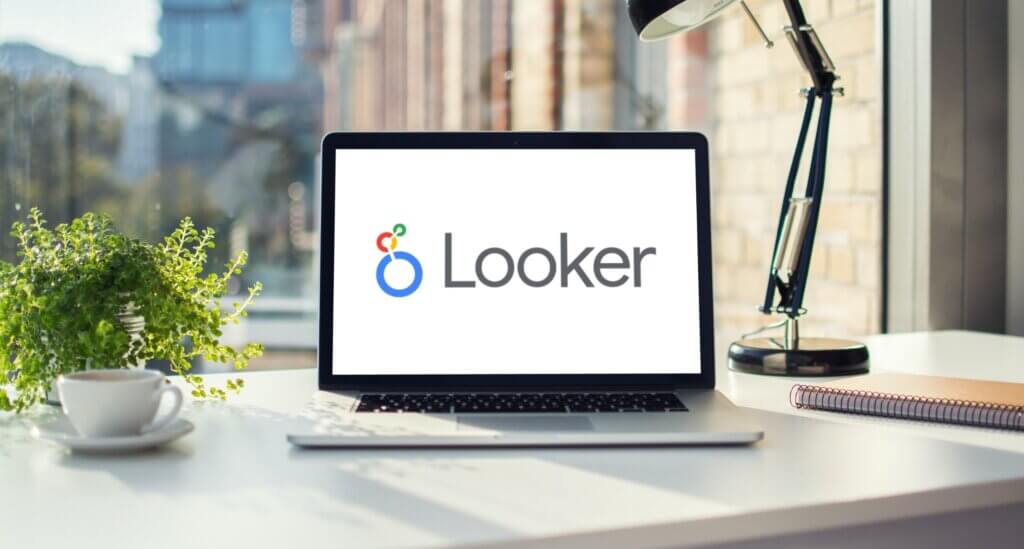 English Version: 10 Features that make Looker stand out from other BI tools!

by people for people